I’ve always known that I wouldn’t like Samsung’s Touchwiz interface even before I had the Galaxy Note II in my possession. And the moment I had it, I immediately opt for some other launcher. But then it still nag me that there’re some traces of Samsung inside the device.

I’ve heard about CyanogenMod, a custom ROM for non-Google device which based on official Android Open Source Project ROM for a while. I knew that they’ve a custom ROM for Note II and since I really like the “pureness” of Jelly Bean (Yes, I said “I like Android OS”), I decided to replace Samsung ROM with CyanogenMod on my Note II.

Note: CyanogenMod for Note II is still “under development”. They called it nightly. I found it to be quite stable for regular usage.

CyanogenMod has all of the pure Android goodness with a little bit more. But the device still has come of Samsung property which I’d like to remove.

First of all, I want to get the software keys back and remove the capacitive touch buttons. After a bit of Googling, I found what I have to do.

Enable software keys by adding the following line to /system/build.prop.

To deactivate the capacitive touch buttons, I found two sources with different suggestion. Never mind, I’ll use both.

I add the following lines to /system/usr/keylayout/sec_touchkey.kl.

Then I remark out lines from /system/usr/keylayout/Generic.kl, look for key 139 and 158. 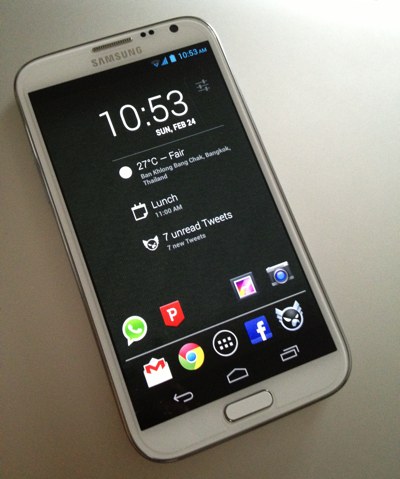 Last but not least, I don’t like camera sound. I’ve found a page saying that I should add the following line to build.prop but it doesn’t seems to work for me.

Finally, reboot the phone and it should look very much like an official Google’s Galaxy Note II.

Obviously, all of the Samsung features do not work. So there will be no S-Pen. The motion-thing will not work. And many other things. But hey, those features don’t actually come with Android. :)

Note There is one draw back. You’ll have to redo all these modification after every firmware upgrade. Not too difficult though.

Note To make changes on the device with shell. Run adb shell then su follows by mount -o rw,remount /system.